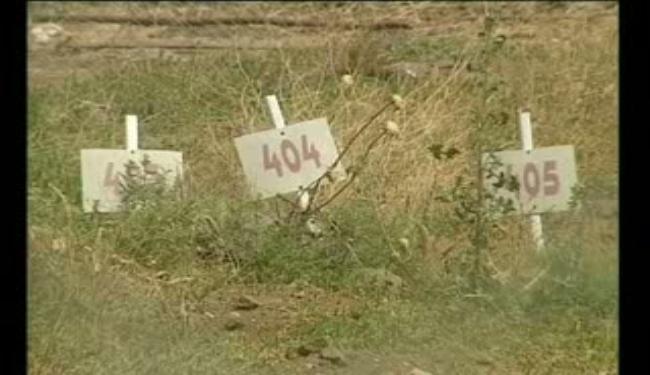 The Israeli Authorities handed, on Tuesday evening, the remains of five Palestinians who were buried at the Numbers Graveyard for many years. The bodies were moved to the Taybeh roadblock, in the northern part of the West Bank, before being handed over to the Palestinians.Saher Sarsour, head of the Jerusalem Legal Aid Center, has reported that hundreds of officials and residents gathered at the roadblock to welcome the remains of the slain Palestinians.

Israel will also be handing over the remains of Mohammad al-Hanbaly, who was a senior leader of Hamas’ al-Qassam Brigades, by next week.

Abdullah Alawna was killed on June 26, 2003, during what was described as a “joint mission” carried out by al-Qassam Brigades and al-Quds Brigades of the Islamic Jihad, in Baqa al-Gharbiyya.

Imad Kamel Zobeidy, from Nablus, carried out a suicide bombing in Kfar Saba, on April 22, 2001. Two Israelis were killed and several others were injured.

Khaled Sobhy Sonjoq, from Tulkarem, was killed on December 2, 2001, during armed clashes between Palestinian fighters and Israeli soldiers near an Israeli settlement west of Tulkarem. He was a member of the al-Aqsa Brigades of the Fateh movement.

Israeli legal groups estimates that there are hundreds of Palestinian and Arab fighters still buried in numbered graves.

The Center said Israel withholds the remains of the slain fighters in order to punish their families. Israel also demolished the homes and other belongings of the Palestinian fighters.

On February 2nd, 2014, Israel returned the remains of Ayat al-Akhras, from the Deheisha refugee camp in Bethlehem, and Daoud Abu Sway, from nearby Artas village.

Al-Akhras, 18, died in 2002 after she detonated an explosive belt outside a supermarket in West Jerusalem, killing herself, 17-year-old Rachel Levy, and a security guard.

Abu Swayy, age 46, died after detonating an explosive belt in West Jerusalem, outside of the David Citadel Hotel. Three people were injured in the blast.

On Thursday, June 31, 2012, Israel released the remains of 91 Palestinians who were killed in prison, in bombings, and while resisting the Israeli occupation in the Palestinian territories.