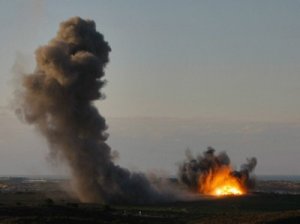 [Tuesday Evening, March 11, 2014] Palestinian medical sources said that three Palestinians were killed, and seven were injured, in an explosion which took place in a home in Beit Hanoun town, in the northern part of the Gaza Strip.The explosion rocked the third floor of a home belonging to members of the al-Hamadin family.

The sources added that the bodies of three slain Palestinians have been severely mutilated due to the blast, while the seven survivors suffered serious injuries.

Earlier on Tuesday, three fighters of the al-Quds Brigades, the armed wing of the Islamic Jihad, were killed after the Israeli air force fired missiles at them, east of Rafah, in the southern part of the Gaza Strip.

The slain Palestinian, who also hold a Jordanian citizenship, has been identified as Raed Ala’ Ed-Deen Z’eitar, age 38, from the northern West Bank city of Nablus.

In related news, medical sources in Gaza have reported, Tuesday, that a Palestinian man died of injuries suffered several days ago, when a siege-busting border tunnel collapsed on him, near Rafah.

The sources said that Nidal Abu Luly died of serious injuries, suffered four days ago, when the tunnel collapsed as he worked in it.