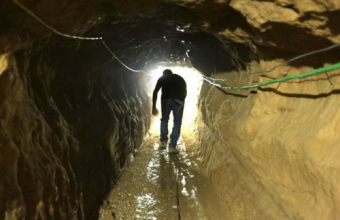 Hundreds of Palestinians have been killed in similar accidents, when the Israeli army bombarded the tunnels as they worked in them.

Also on Tuesday, Israeli navy boats attacked a Palestinian fishing boats in Gaza waters, kidnapping three fishermen before towing their boats, and taking them to an unknown destination.

On Saturday evening, February 1, 2014, a young Palestinian man was killed when a siege-busting border tunnel collapsed on him, near Rafah.

Medical sources said the young man, 20 years of age, from al-Maghazi refugee camp, died under the rubble; his body was later located and moved to a local hospital.

It is worth noting that the Egyptian has army closed more than 95% of the border tunnel, as part of a campaign it started against the tunnels, several months ago.

On October 27 of last year, a Palestinian fighter from the al-Qassam Brigades, of the Hamas movement, died in an accident while travelling through one of its tunnels.

The fighter was identified as Saleh Yousef al-Basheety, age 23.

Approximately 324 Palestinians have been killed in similar incidents since Israel imposed the deadly siege on Gaza in 2006. At least 20 Palestinians were killed when the Israeli military bombarded tunnels while they were in them.

In addition, more than 400 patients, including infants and children, died due to Israeli neglect, many of them while awaiting Israeli permits to cross the border for medical treatment.