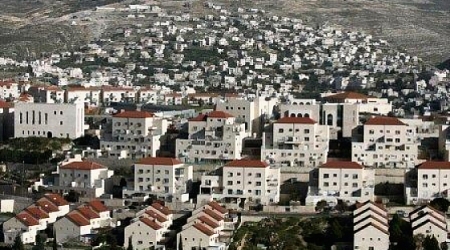 The Israeli Housing Ministry approved, Tuesday, construction permits for 387 settlement units in Ramat Shlomo, to the south of occupied Jerusalem.By this decision, occupation authorities aim to expand the settlement by adding 1500 units for the east side, towards Ramot settlement, Al Ray reports.

The settlements of Ramat Shlomo and Ramot will form huge enclave on the northern border of Jerusalem to isolate and separate the western villages from the city, to cut geographically the connection between those villages and to encircle Jerusalem with bypass roads, to serve settlements and settlers.

Member of the Executive Committee of the PLO and Head of the Jerusalem Affairs, Ahmed Qurei, stressed that the permits will swallow more lands in the town and deprive Palestinian citizens, in Beit Hanina and Shufat towns, of their lands.

They will not be able any more to invest those lands for their favor.

In related news, Al Ray reports that Israeli bulldozers demolished the Bedouin village of Al-Araqeeb, in the Negev, for the 66th time, leaving its inhabitants in the open air.

Local sources said that occupation bulldozers demolished the village, on Wednesday morning, leaving the women and children outdoors, in spite of the heavy rain and bitter cold.

The demolition came after two days of storming the Islamic cemetery in the village by an Israeli special unit from the interior ministry, protected by Israeli police.

Coordinator of the village, Aziz Turi, said: ‘Forcing women and children to stay outdoor under heavy rains is a crime against humanity. We stress that we will stay steadfast in our lands, despite the injustice and tyranny of the Israeli authority.’

Israel does not recognize 35 of the 46 Bedouin towns and villages in the Negev, which are home to around 90,000 people, according to ACRI (Association for Civil Rights in Israel).

The ‘unrecognized’ villages are not connected to water, electricity or sewerage systems.