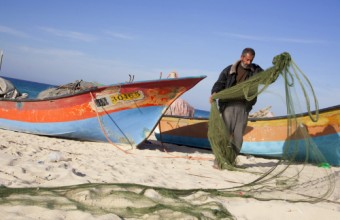 On Tuesday, March 12, 2014, Israeli naval boats opened fire at Palestinian fishermen from Gaza, official Palestinian News Agency (WAFA) reports.(PNN/WAFA) The incident happened off the coast of As-Sudaniya, reportedly inside the six mile fishing zone, which is officially allowed by the Israeli authority. The boats were severely damaged by an artillery shell and additional gunfire.

The fishermen manged to flee, and there were no injuries reported among them. According to WAFA, these incidents happens on a regular basis even in the legal six-mile fishing zone.

The Israeli navy, on Tuesday night, abducted and interrogated two Palestinian fishermen sailing along the coast of Gaza, on claims that they were sailing out of the Gaza allowed fishing range.