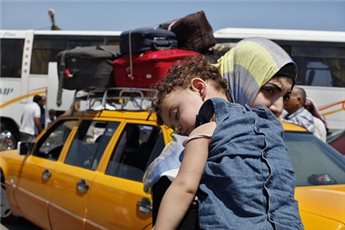 A three-year-old child died, on Thursday, after he was unable to receive medical care abroad, due to the closure of the Rafah crossing, an activist group said.
Spokesman for the National Committee to Break the Siege, Adham Abu Salmieh, said that Ahmad Ammar Abu Nahl was suffering from an enlarged heart and liver, and had been waiting to go to Turkey via Egypt for treatment.

However, the young child died Thursday while waiting for the crossing to open.

Abu Salmieh told Ma’an News Agency that the continued death of victims is unfortunate and demanded the reopening of the Rafah crossing for humanitarian cases.

The Rafah crossing into Egypt has been the principal connection between the Gaza Strip’s 1.7 million residents and the outside world since the imposition of an economic blockade by the State of Israel, beginning in 2007.

The death of Abu Nahl brings the number of deaths to two, as a result of the closure of the crossing, since the the Egyptian military overthrew democratically-elected president Morsi, Abu Salmieh said.

Egypt’s army has repeatedly closed the Rafah border crossing since the July coup, while simultaneously destroying hundreds of tunnels that Gazans have used for years to import fuel, building materials and other goods, as well as to enter and exit the blockaded coastal enclave.