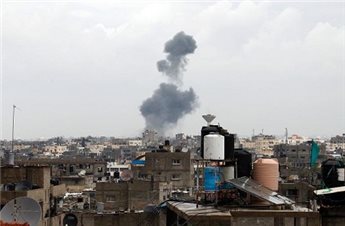 (AFP/Ma’an) A truce declared by Gaza militants appears to be largely holding, on Friday, with the Israeli military reporting a single rocket fired after two days of tit-for-tat violence.’Moments ago an additional rocket hit,’ an army statement said at 11:47 a.m.

A spokeswoman told AFP it was the first to strike Israel in more than 12 hours.

It was the sixth to hit since Islamic Jihad declared, on Thursday, that an Egyptian-brokered truce on the Israel-Gaza border had been restored after Israeli warplanes pounded the territory in response to a barrage of rocket fire by its militants.

The truce, which was to have taken effect at 1200 GMT on Thursday, was tested when the Israeli military reported further rocket fire from Gaza hours later and launched retaliatory air strikes for a second night.

Israeli aircraft also struck a base of the hardline Popular Resistance Committees in the southern town of Rafah.

Three rockets had struck during the morning, before the announcement of the renewed truce.

On Wednesday, at least 60 rockets hit Israel and Israeli warplanes pounded Gaza in response, in the worst violence in the region since an eight-day conflict between Israel and Hamas, occurring in November of 2012.

Neither side reported any casualties.

The latest flare-up began on Tuesday when Islamic Jihad militants fired a mortar round at Israeli troops allegedly trying to enter southern Gaza, prompting a retaliatory air strike which killed three of them.

In revenge, the Islamic Jihad’s armed wing, the Al-Quds Brigades, launched a coordinated barrage of rockets at southern Israel on Wednesday, and continued into the night, with the group putting the number at 130.

Israel responded by hitting 29 targets across Gaza that night, including Islamic Jihad and Hamas bases. Another seven air strikes followed, on Thursday morning, with seven more around midnight.

Analysts said that Israel was not interested in a major confrontation, but some predicted that the next flare-up would only be a matter of time.

Egypt communicated with Islamic Jihad directly, to broker the most recent truce with Israel and intentionally ignored Hamas, a leader for the movement as well, as an Egyptian security official said on Thursday.

The decision to coordinate directly with Islamic Jihad, the militant group which launched the vast majority of Wednesday’s rocket barrage on Israel, and not with Hamas, which rules the Gaza Strip, highlights the continuing tension between Egypt’s military and the party.

Ties between Cairo and Hamas flourished during president Mohamed Morsi’s year in power but have drastically deteriorated since a military coup, in July of last year, which saw the Muslim Brotherhood leader ousted from power.

Cairo’s new military-installed authorities launched a deadly crackdown on protests by supporters of Morsi, killing in excess of 1,400 people.

Egyptian troops have also destroyed hundreds of smuggling tunnels, under the border with Gaza, which are used to supply the Palestinian enclave with fuel and construction materials, due to Israeli restrictions.

Hamas has denied accusations, by Egyptian officials, that it is involved in fighting in the Sinai Peninsula, where militant attacks on security forces have surged since July.