A National Summit that prompts National Governments to Act 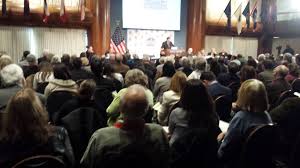 Public discussion on the Palestinian/Israeli crisis, which has diminished in recent years, received a powerful impetus with The National Summit to Reassess the U.S.-Israel Special Relationship, March 7 at the National Press Club, Washington, DC.Sponsored by The Council for the National Interest, http://www.councilforthenationalinterest.org/new/, The Institute for Research Middle Eastern Policy,http://www.irmep.org/, The Washington Report on Middle East Affairs, http://www.wrmea.org/, and If Americans Knew, http://www.ifamericansknew.org/, the event featured a wide range of eloquent speakers — former U.S. military, diplomatic, government and intelligence officials, present academics, political researchers and economic savants , and previous and current members of the U.S. Congress. Reaching a standing room crowd of more than 350 persons at times, the National Press Club attendees sat attentively at the landmark event:

The speakers did not disappoint; each was informative and spoke eloquently, with conviction, and credibly. The entire eight hours were captivating and the writer never became restless while watching the video.

One sour note: In a panel, “Has Israel lobby captured political parties & news media?’ Jeffrey Blankfort, outspoken radio commentator and well know antagonist of the ‘Jewish left,’ unnecessarily and unfairly berated Noah Chomsky, Phyllis Bennis, Amy Goodman and others, all of whom have been in the frontline in the battle for Palestinian rights, accusing them of not sufficiently contradicting AIPAC and Israel.

Although Blankfort may deserve praise for his efforts during several decades, using this forum to disparage those who are held in high regard by most on the podium and in the audience did not sit well.

His discourse went beyond the topic, was a private argument, felt tinged with conspiracy and seemed divisive. From my perspective, he received scant applause for his remarks.

C-Span helped spread the message by broadcasting the entire event live to a national audience and repeating the program on the succeeding day. Rather than influence readers with a subjective summary of the event, I prefer to recommend a viewing of the six panels of the conference on the C-Span website.

Panel 2.0 Does Israel and its lobby exercise too much influence on U.S. decisions to wage war in the Middle East?
Stephen Sniegoski, Karen Kwiatkowski, Gareth Porter, and Brigadier General (Ret) James David.
http://www.c-span.org/video/?c4486494/20-israel-lobby-e…-east

Panel 4.0 How did the ‘special relationship’ come to be?
Stephen Walt, Geoffrey Wawro, John Quigley, and Alison Weir.
http://www.c-span.org/video/?c4486497/40-history-specia…-come

The overwhelming success of the National Summit is measured by more than the quality of the speakers and audience reception – the planning, choice of location, structure of the debate, and technical arrangements contributed to a finely tuned production that proceeded smoothly and without a hiccup. All those associated with the performance deserve much praise.

That does not mean there were no problems to the event. It was not the fault of the arrangers, but the audience lacked younger generations, those between 20-50 years of age. Attracting mostly an older audience could have been due to one or more of several reasons:

(1) The conference hours did not allow working persons to attend.
(2) The Middle East crisis, as most foreign affairs, does not stir sufficient interest in an American public born after the Vietnam War.
(3) The Israeli propaganda machine has been successful in distracting those who did not grow up with complete knowledge of the crisis.
(4) Publicity for the event did not reach a wide audience. This is not unusual – the media never cooperates with publicizing this type of event.

The one-sided demographics create a doubt to the Summit’s effectiveness. Did it relate mainly to those who already understood the situation and would only carry the truths to their graves? Will the knowledge and expressive words be translated into community and government action that re-addresses the Middle East crisis?

Lack of media coverage, before, during and after the conference was another derogatory factor. Did, except for C-Span, any major media – print, radio, television or online — report on the event? Not apparent to this writer.

Containment of the National Summit to the C-Span and the National Press Club audience would be a travesty. Anyone who desires a just solution to the Middle East crisis would be wise to pass on to others the information derived from the conference – creating an international chain that links the world in common objectives, which inform their communities and governments of the ‘hidden history” and clarify positions that lead to resolving the crisis.

Another discussion on the Middle East crisis also deserves mention.

The Middle East Institute convened a group of recognized Middle East experts to discuss how the U.S. State Department can advance its peace initiative.

Daniel Levy, director of the Middle East and North Africa Programme at the European Council on Foreign Relations.

Aaron David Miller, vice president for new initiatives and a distinguished scholar at the Woodrow Wilson International Center for Scholars, and Shibley Telhami, Anwar Sadat Professor for Peace and Development at the University of Maryland, presented well documented reviews of the crisis.

Speaking with candor, aplomb and acumen, all three orators proposed directions for John Kerry to follow.

Levy and Miller spoke with unusual passions, which highlighted their feelings of the seriousness of the situation.

Aaron Miller considered President Obama to be aware of what needs to be done but politically confined to a more compromising position.

Daniel Levy stressed the problem is occupation and illegal settlements. The continuous demand by Israeli Prime Minister Netanyahu for Palestinian PM Abbas to recognizeIsrael as a Jewish state is counter-productive to Judaism and only a plot to block the peace process.

Shibley Telhami’s well composed talk led to a logical conclusion – the contestants will be forced to accept a just two-state solution because any other result will be worse for each of them.

That was my succinct interpretations, which cannot do justice to the excellent and informative discussions.

Those interested in learning the most salient features of the Middle East crisis, which includes ‘behind the scene’ revelations, can hit the link below for the complete audio and video of the event:

Left out of all the talks is one important consideration. For the leaders of Israel, it is an all or nothing situation – they want a Jewish state, the Jordan valley, all the aquifers, the arable land and an impotent Palestine or they will fail to achieve their original vision, which to them, leaves them with nothing. If they obtain all, then the Palestinians will have nothing.

President Obama and Secretary of State John Kerry should realize the trajectory of the crisis. By their failure to contain Israel, the American leaders will be partners in the destruction of the Palestinian people — a horror that defies belief and an arrangement that no human being wants to consider and all human beings should seek to prevent.

Dan Lieberman is editor of Alternative Insight, a commentary on foreign policy and politics. He is author of the book A Third Party Can Succeed in America and a Kindle: The Artistry of a Dog.

Dan can be reached at alternativeinsight@earthlink.net