Four Kidnapped from Hebron and Jenin, One Summoned 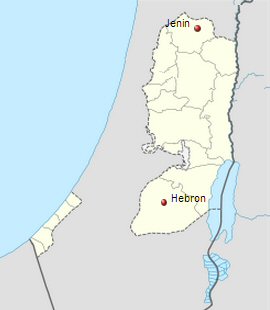 Israeli forces kidnapped, on Saturday, four people from the districts of Hebron and Jenin, as well as summoning one for interrogation, according to statements by security sources.Occupation forces stormed Bani Naʻim, a town located to the east of Hebron, abducting three people aged between 24 and 26 years after breaking into, searching and tampering with the contents of their homes.

Forces also stormed Dura, located to the south of Hebron, serving one individual with a notice to appear before Israeli intelligence, according to WAFA.

Several neighborhoods in the city of Hebron were also invaded, with checkpoints set up at the entrances of Saʻir and Halhul, both located to the north of Hebron, as well as Al-Fawar camp, in the south of Hebron, where forces stopped vehicles travelling along the roads and inspected passengers’ ID cards.

In Yaʻbad, located to the west of Jenin, one 19-year-old person was abducted by occupation forces, after they broke into and searched his house.

Checkpoints have been set up at the entrance of Taʻanak, northwest of Jenin, where several people were detained for more than an hour before the village was stormed by Israeli soldiers.