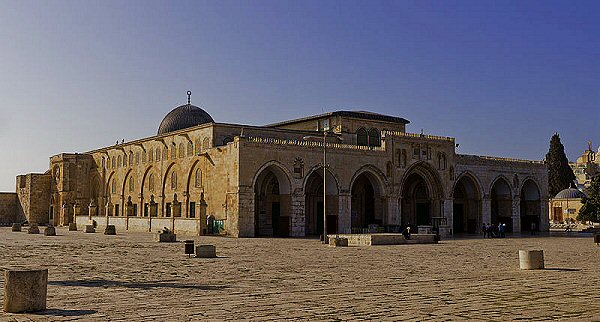 [Monday, March 17, 2014] Israeli police have closed the gates leading to Al Aqsa Mosque, in Jerusalem, and banned Palestinians under 50 years of age from entering, giving rise to violent confrontations.Israeli police, today, restricted entry of Palestinians into Al-Aqsa Mosque compound, while allowing the entry of Jewish observers to perform religious rituals there, according to media sources.

Last week, the age restriction applied specifically to males under the age of 40, when Israeli authorities deployed troops in various cities of Jerusalem, especially in the Old City, with respect to the vicinity of Al Aqsa Mosque and its main entrances.

Attacks against the mosque are not new to Palestinians but, in fact, have been escalating over the winter season, ever since Rabbi Yehuda Glick, chairman of the so-called ‘Temple Mount Heritage Fund’, began publicly escorting a number of religious Jews, backed by Israeli police, through a series of tours within the compund, inciting violent confrontations with worshippers and students who frequent the mosque.

Al-Aqsa mosque is located in East Jerusalem, a part of the internationally recognized Palestinian territories that have been illegaly occupied by the Israeli military since 1967.

It is venerated as Judaism’s most holy place, as it sits where Jews commonly accept as the site of the First and Second Temples. The Second Temple was destroyed by the Romans in 70 AD.

Politcal partisans of Israel have gone so far as to suggest the offensive bombing of Al Aqsa to Western Christians, in order to see a third temple built, by reason of what is explained to them as a revelation of ‘end times’ prophecy and, therefore, a valid motive for full-on alliance and complicity with the inhumane actions of the Israeli state against Palestinians.

However, not all Christians accept such an interpretation of their ancient texts, let alone from religious sources outside the established Christian community:

‘I did not see a temple in the city, because the Lord God Almighty and the Lamb are its temple.’ ~Revelation 21:22

This dogmatic schism has been the subject of much scrutiny within Christian circles, in addition to being the impetus of significant action within the international community, in regard to the ongoing economic and cultural boycott of Israeli culture as it is currently recognized.

Angry worshipers who gathered at Bab al-Nazer Gate scuffled with the police since the early morning hours, when Israeli police circumvented their entrance to Al Aqsa, using clubs and tear gas canisters against the Palestinians, causing several injuries among them, including women and children.