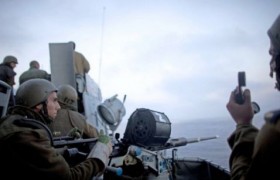 Israeli sources alleged Monday [March 17, 2014] that gunmen riding Palestinian boats exchanged fire with Israeli navy ships, close to the Gaza shore.The sources said the navy chased boasts, believed to be used by smugglers, and exchanged fire with them. The alleged incident apparently led to no casualties or arrests.

Israel said this is the second incident of armed clashes between Palestinian boats and the navy, in Gaza.
On March 5, Israel claimed that the navy attacked what was described as a “ship carrying Syrian-made rockets”.

According to the Jerusalem Post, the ship was discovered in the Red Sea, approximately 1500 kilometers away from Israeli shores, and that it carried M-302 Syrian-made rockets.

It said that the navy arrested the crew and towed the ship to Eilat, and that the Israeli Military Intelligence believes the rockets were airlifted from Syria to Iran before they were shipped to Iraq where they were concealed in cement sacks.

The Jerusalem Post added that the ship then sailed to Port Sudan, close to Sudan’s border with Eritrea, and embarked on a sail which was expected to last for nearly 10 days.