13 Days Without Water in East Jerusalem 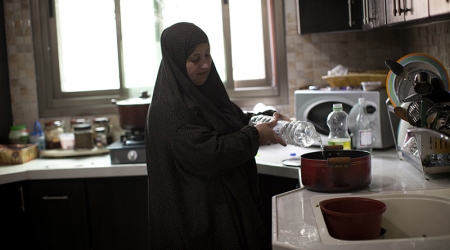 The East Jerusalem neighborhoods of Ras Shehada, Ras Khamis, Dahyat A’salam and the Shufat refugee camp, which are cut off from the rest of the city by the separation wall, have gone without running water since March 4.
(Al Ray) Locals say that Ras Shehada has had problems with water for more than two months, and Ras Khamis for more than 15 days, generally with low pressure and occasional cut-offs, and that this is the worst extended outage which these neighborhoods have ever experienced.

With the rooftop reserve tanks now emptied, residents have no choice but to buy water at high prices from local vendors. Ronit Sela, director of a human rights project in East Jerusalem for the Association for Civil Rights in Israel (ACRI), wrote a letter last week to Infrastructure Minister Silvan Shalom which said, in part:

“In a conversation with Mr. Eli Cohen, Associate Director of The Gihon Corporation, the water corporation responsible for supply water to Jerusalem, ACRI was told that the company’s water systems and gauges did not indicate that there was any problem with the water supply to these areas. This however does not change the harsh reality of tens of thousands of people, including infants, children, women and the sick, being left without water. It is essential to remember that the right to water is a fundamental right, the absence of which has serious implications on the right to life and health.”

The Gihon Corporation and the Jerusalem Municipality correctly assert that the current water infrastructure in these neighborhoods is insufficient to meet the water demands of the residents.

Indeed, this grave situation has been exacerbated in recent years by natural population growth, together with the erection of the separation barrier that disconnects them from the rest of the city.

It is the responsibility of the Ministry of National Infrastructure to intervene to find an immediate solution to this water shortage and ensure that these residents have access in the long term to a secure water supply.

This week, ACRI is going to the High Court to file an urgent petition on behalf of area residents calling on the National Water Authority and HaGihon to address the problem.