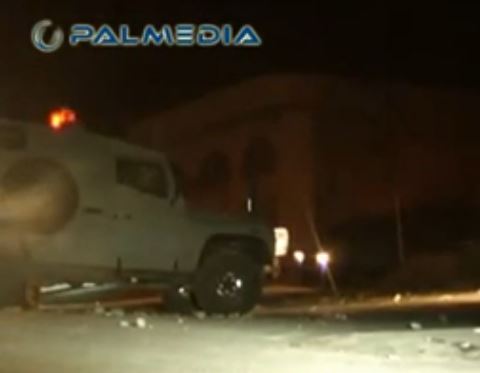 WAFA said that the three kidnapped Palestinians have been identified as Sa’id Awadallah Nassar, 20, Riyadh Fathi Gheith, 18, and Mo’tasem Mazen al-Mohtaseb. They were handcuffed, blindfolded and, then, moved to an unknown destination.

Furthermore, they installed roadblocks at the entrances of Sa’ir and Halhoul towns, the Shuhada’ Junction and the northern entrance of Hebron city, where they stopped and searched dozens of vehicles, interrogating residents while inspecting their ID cards.

Just yesterday, clashes erupted between Israeli occupation forces and school students, following a rally that was launched in al-Fawwar refugee camp, south of Hebron, in support with the Palestinian President Mahmoud Abbas.

According to the PNN, coordinator of National Committee to Resist Wall and Settlement in Hebron, Rateb al-Jbour, said that Israeli forces fired rubber-coated bullets and tear gas canisters toward the students and the participants. The 46-year-old teacher Jaber Mohammed Awwad suffered suffocation injuries due to tear gas inhalation.