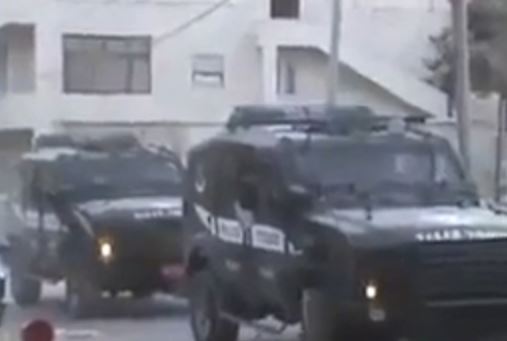 [Tuesday Evening, March 18, 2014] Palestinian medical sources have reported that a young Palestinian man was shot by a live round fired by Israeli soldiers invading Teqoua’ town, east of Bethlehem. Dozens suffered the effects of tear gas inhalation.The sources said that clashes took place between the invading soldiers and dozens of local youths who hurled stones and empty bottles at them.

The wounded Palestinian, Mohammad Sabah, was shot by a live round in his abdomen, and was moved to a hospital in Bethlehem.

Mohammad al-Badan, head of the Teqoua’ village council, told the Radio Bethlehem 2000 that the clashes took place after three Israeli military jeeps invaded the school district, north of the town.

Eyewitnesses said that a military jeep flipped over while chasing several Palestinians in the town, and that one soldier was injured.