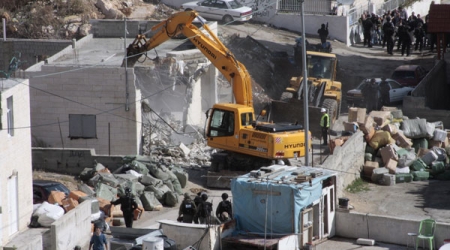 Israeli occupation authorities, on Thursday morning, served four demolition orders for infrastructure projects in the Palestinian village of Khirbat al-Tawil, to the south of the West Bank city of Nablus.
Activist Hamza Diriya (Resistance Against the Separation Wall and Settlement Committee), said that Israeli administration personnel, accompanied with military patrols, came to Khirbat al-Tawil in the morning, handing residents demolition orders for power lines and a water reservoir.

Diriya explained that the orders include the demolition of the power network which was funded by the Belgian government in 2007 with $200,000, Al Ray reports.

Diriya confirmed that the occupation is trying to create instability in Khirbat al-Tawil and to displace the inhabitants after the demolitions, which have been repeated many times throughout the past five years.