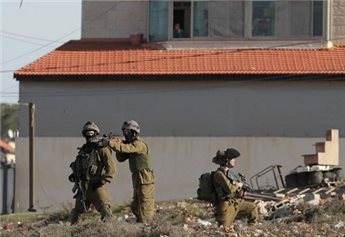 Israeli forces shot and killed a Palestinian teenager in the Hebron district, on Wednesday, according to security and medical sources.Photo: An Israeli soldier aims his weapon towards Palestinian protesters
during clashes on the outskirts of Jalazun refugee camp, near the West Bank city of Ramallah, on January 31, 2014.

The sources said the 15-year-old was attempting to cross Israel’s separation wall, near the southernmost West Bank area of al-Ramadin, when Israeli forces shot him dead.

Israeli troops gave him no warning before shooting him, the sources said.

The youth has been identified as Yousef Nayif Yousef Shawamrah Abu Akar from the village of Deir al-Asal al-Fauqa, south of Hebron.

Israeli forces have yet to deliver his body.