In Support Of Detainees; Candle Procession Held In Bethlehem 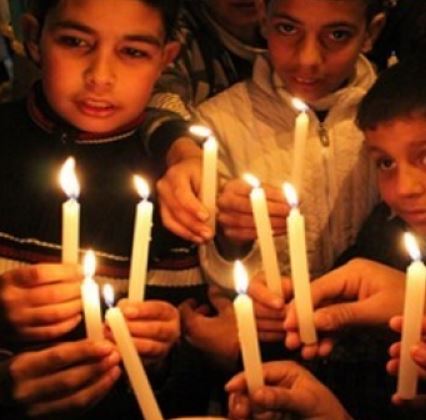 [Wednesday Evening, March 21, 2014] Hundreds of Palestinians gathered at Manger Square in Bethlehem city, in occupied Palestine, and held a massive procession in support of Palestinian political prisoners held by Israel under very difficult conditions.The protestors carried Palestinian flags and signs calling for more solidarity with all political prisoners, and calling for more popular activities to highlight the suffering and abuse the detainees face in Israeli prisons, detention camps and interrogation facilities.

Palestinian Minister of Detainees, Issa Qaraqe’, said that this procession is a message to the international community, affirming the legitimate rights of the detainees and informing the world that releasing all detainees is an essential part of the Palestinian struggle for liberation and independence.

He held Israel responsible for the lives of all detainees, especially since dozens of them are currently in a state of hunger strike, and many others are facing very serious health condition but denied the right to proper medical attention and treatment.

Qaraqe’ added that this coming April is the month of solidarity with the detainees, locally and internationally, as dozens of activities will be held to deliver the message of the detainees, to raise awareness to their suffering and the real dangers they face.

“The detainees are denied their basic rights, are abused and humiliated”, he said. “The International Community must act and stop Israel’s crimes and abuse.”

There are more than 205 Palestinian detainees who have died in Israeli prisons since 1967, including 74 who were deliberately killed, seven of whom were shot and killed in prison, 71 who died due to extreme torture, and 53 who died due to the lack or absence of medical attention.