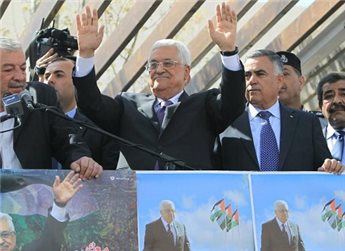 (AFP/Ma’an) Earlier this month, Abbas said Palestinians will not agree to extend peace talks with Israel beyond their April 29 deadline without Israel releasing more prisoners beyond the fourth and final tranche planned for later this month.

During his meeting with Obama in Washington on Monday, ‘President Abbas demanded the release of more prisoners and Palestinian leaders in Israeli jails, like Saadat and Barghuti and Shubaki,’ manager of the Palestinian prisoner club Abdulal al-Anani told the official Voice of Palestine radio.

He was referring to Popular Front for the Liberation of Palestine leader Ahmad Saadat, former Palestinian Liberation Organization finance official Fuad Shubaki, and Marwan Barghuti, one of the main architects of the 2000 intifada.

The visit of four EU MPs came as Israel was mulling whether or not to release a final batch of long-term Palestinian prisoners under its commitments to US-brokered peace talks.

The release of 78 long-term Palestinian prisoners since July has been welcomed by Abbas and by the public, especially jubilant families of the inmates, who saw their internment as political. But it has angered bereaved Israeli families, whose relatives were killed at the hands of some of those released.

Peace talks relaunched last July have made next to no progress, marred by bitter disputes over core issues. Washington is attempting to get agreement on a framework proposal which would extend the talks to the year’s end.