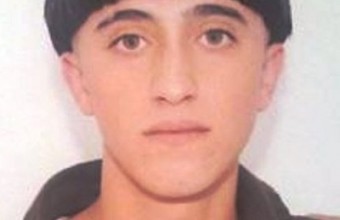 Ali Shamlawi, 17, is accused of throwing stones at a truck near Ariel, a settlement in the occupied West Bank, causing a traffic accident in which a three-year-old Israeli girl was seriously injured.

Shamlawi says he confessed to throwing stones under duress and now denies the charges. In a sworn testimony given to DCI-Palestine, he claims he was held in solitary confinement, beaten and intimidated, and denied access to counsel by Israeli authorities during his arrest and interrogation.

He has now been in detention for a year and neither his lawyer, nor his family know when a verdict will be reached.

Under Israeli military law, Palestinian children can be imprisoned for up to a maximum of one year before legal proceedings must be completed against them. The military court has the right to extend detention by a further 60 days. After that, the military court of appeals can extend custody indefinitely in three-month chunks.

Shamlawi is one of five boys arrested in connection with the same stone-throwing incident. The others are: Mohammed Suliman, Mohammad Kleib, Tamer Souf, and Ammar Souf. They were all aged 16 at the time.

Israeli military law, which fails to ensure and denies basic and fundamental rights, is applied exclusively to the Palestinian population, including women and children. Settlers living in the West Bank are subject to the Israeli civil legal system. No Israeli children come into contact with the military court system.

Each year, around 500-700 Palestinian children, some as young as 12, are arrested, detained and prosecuted in the Israeli military detention system, with the majority of Palestinian child detainees held on charges of throwing stones.

The boys are each charged with 20 counts of attempted murder – among other charges.