Several Kidnappings and Interrogations Across West Bank and Jerusalem 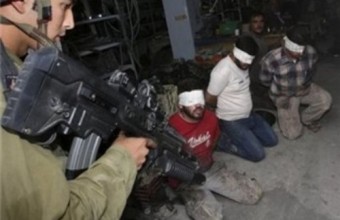 [Tuesday, March 25, 2014] Nine people from the districts of Hebron, Jenin, and Nablus, in addition to another in Jerusalem, were kidnapped by occupation forces on Tuesday, according to reports by media and security sources.Soldiers stormed Beit ‘Awa, a village located to the southwest of Hebron, and al-Fahs, abducting two people, after breaking into and searching their houses. The abductees are identified as Mohammed Raed Nayef al-Masalmeh, age 20, and Jum’aa Abdul Hadi al-Masalmeh, age 16.

The houses of Muntaser Rebhi al-Masalmeh and Izzat Abdullah Hassan Masalmeh, both 21, were raided in the invasions. An Israeli Intelligence officer called them, demanding they turn themselves over to the agency.

Local sources said that six military vehicles raided the village at 2 am, carrying out a large search campaign.

Forces also invaded Surif and Bani Naʻim, two towns located to the northwest and east of Hebron respectively, and blocked the southern entrance of Um al-Harayeq, under the pretext of conducting military drills, forcing Palestinians to take alternative roads to reach their workplaces, WAFA Palestinian News & Info Agency has reported.

Meanwhile in Jenin, forces stormed al-Yamoun, a town located to the west of Jenin, where they took four people, after breaking into and searching several houses. According to the Palestinian News Network (PNN), the detainees are: Hamzeh Basman Abu al-Hayga’, age 20, Sharaf Wael Abu Obaid, 21, Ayman Ahmed Frehat, 23, Raed Salah Abu al-Hassan, 40. They were arrested after occupation forces raided and searched their parents’ houses.

Residents Mohammed Hassan Zayed, SufyanMussa Khamayseh, Mu’ayad Hassan Merweh and his brother Bassem were all interrogated, after having their houses searched.

In Nablus, soldiers backed with military vehicles infliltrated ‘Ayn al-Maˈ, located to the west of Nablus, kidnapping Mohammed Qatouni, 28, and seizing his personal laptop after breaking into and searching his house.

Balata refugee camp, located to the east of Nablus, was also raided, where soldiers broke into and tampered with the contents of some houses belonging to the Amero and al-Jarmi families.

In Jerusalem, Israeli police took one person, a resident of Taybeh village, under the pretext of an attack on Israeli right-wing member of Knesset, Moshe Fieglin. Police claim that the person was identified after checking surveillance cameras installed in the Al-Aqsa mosque compound, where he attempted to attack Feiglin.