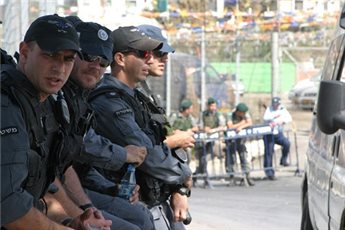 Three Israelis, late Monday, attempted to set fire to a gift shop owned by a Palestinian man in Jerusalem, on Jaffa Street, according to an Israeli police spokeswoman.
Luba al-Samri said, in a statement, that the suspects also vandalized the shop, posting slogans reading ‘Kahane was right,’ before fleeing the scene.

She said police were investigating the incident, according to Ma’an.

Meir Kahane was an American-born Israeli rabbi and political figure who advocated expelling all Arabs from Israel and the occupied Palestinian territories.

This comes a day after settlers launched a price-tag attack against Palestinians in Beit Hanina, located to the north of Jerusalem, where they slashed the tires of 34 Palestinian-owned vehicles and sprayed racist slogans in the area.