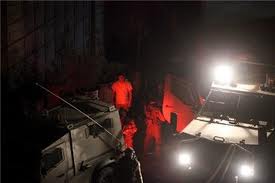 The soldiers violently broke into the home, and searched it, causing excessive property damage.

The invasion comes amongst ongoing clashes resulting from an Israeli military escalation against the camp and its citizens.

Soldiers also invaded the Hebron city, in the southern part of the West Bank, and kidnapped two young men identified as Marwan Mahmoud Emreish, 18, and Waleed Najeeb Zghayyar, 21, after searching their homes.

The Palestinian News & Info Agency (WAFA) has reported that the soldiers also invaded the home of Hamdouna Abu Sneina, and violently searched it. Hamdouna is a former political prisoner.

Soldiers also installed roadblocks at the entrances of Sa’ir and Halhoul towns, north of Hebron, the al-Fawwar refugee camp, south of Hebron, stopped and searched dozens of cars and inspected the ID cards of the passengers.

The army also bulldozed more than five Dunams of Palestinian farmlands in Um Nir village, east of Yatta town. The lands were planted with olive trees, and crops.

Three more Palestinians were kidnapped after the soldiers invaded Ya’bad town, south of the northern West Bank city of Jenin.

The invasions and arrests are part of ongoing violations and assaults carried out by the Israeli army in different parts of the occupied West Bank.