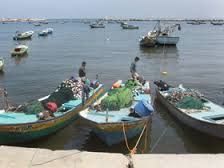 Gaza Strip – Wednesday, March 26, 2014, Palestinian medical sources have reported that four fishermen were wounded after Israeli navy arsenal opened fire on their fishing boats near the Rafah shore, in the southern part of the Gaza Strip. The army also fired rounds of live ammunition at a number of homes.The Palestinian News & Info Agency (WAFA) has reported that Israeli navy arsenal also fired a shell, and that several homes and boats were hit by army fire, causing excessive property damage and four injuries.

Thousands of Palestinian families in Gaza depend on fishing as their only source of livelihood, risking their lives just to be able to fish and support their families.

Last May, Israel decided to allow the fishermen to fish within six nautical miles, but the Israeli navy continued to attack them even within the three nautical miles.