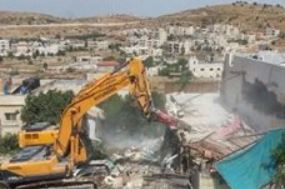 [Wednesday, March 26, 2014] Israeli soldiers invaded the Khallit al-Ein neighborhood, in the at-Tour town of occupied East Jerusalem, and demolished an apartment building that belongs to a local family. The building also contained a mosque and a clinic.The building belongs to resident Ghadir Ajram Abu Ghalia. Dozens of soldiers, undercover militants and police officers invaded the area and surrounded the building before forcing the residents out and violently removing their furniture and belongings.

Ghadir said that the soldiers demolished the building without any prior notice, and that the demolished structure is a two-story, 700 square/meter building which has a mosque, a clinic, two apartments, and storage rooms. Eleven persons were rendered homeless.

The building was constructed nearly three years ago; the family spent 18 years filing legal documents and permit applications just to get a structural plan approved.

The City Council approved the construction, as the land in question is, in fact, designated for construction, but the Ministry of Interior denied the application altogether.

On Tuesday, the family obtained a High Court order to delay the destruction of the property, and the Central Court was supposed to discuss the case in May, but the city council went ahead and demolished it.

This is the second time Israeli forces destroyed the building, as it was first demolished in 2007.