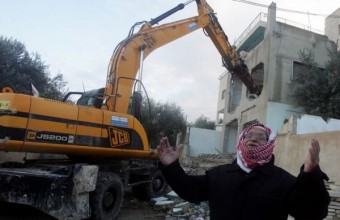 Israeli bulldozers demolished a Palestinian residential building in Tur village of occupied Jerusalem, on Wednesday, under the pretext that it was built without a construction permit.
Local sources in Jerusalem told a PNN reporter that the 300-square-meter building belongs to two brothers named Ghadeer and Mussa Abu Ghaliya. The building included a clinic, a mosque and two residential apartments.

Israeli forces closed off the area to residential access and the municipality staff dismantled gas, water, and power lines, and evacuated the inhabitants before demolishing the building.

In its statement, the Islamic-Christian Commission in Support of Jerusalem and Holy Sites considered such measures by the Israeli government a flagrant violation of humanitarian law, international conventions and other agreements which call for the safety and inviolability of the Holy Places.

The commission called on the international community to exert pressure on Israel to refrain from committing these violations and assaults in the occupied Palestinian territories, and on Muslim and Christian holy sites.

In related news, the municipality of Jerusalem has ordered the demolition of another Palestinian building in East Jerusalem, after claiming that the owner should have obtained a construction permit.

The owner, Muatasim Adila, a lecturer at al-Quds University, told Ma’an Wednesday that the demolition order for his home in Abu Dis was surprising because his building is in the West Bank and he ‘possesses all documents to prove that.’

Adila pointed out that a two-story building was built in 1959, and in 2012 he added a third story after he obtained the needed license from the Palestinian Authority, as the area is under Palestinian control.

The demolition comes into effect on March 29