Ashrawi Calls on US to Stand Up for International Law 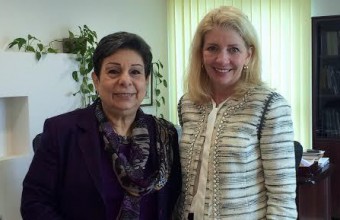 PLO Executive Committee member, Dr. Hanan Ashrawi, called the U.S. to stand up for international law, and to have the political will to curb Israeli violations of international and humanitarian law.She stressed that, ‘unless there is an American commitment to treat Palestinians equally and to hold Israel accountable, there is no hope for peace.’

Ashrawi’s statements came during her meeting with Ambassador-at-Large for Global Women’s Issues, Catherine Russell, at the PLO Headquarters in Ramallah, the Palestinian News Network (PNN) reports.

Ashrawi highlighted the accomplishments of women in Palestine in the face of tremendous odds: ‘Despite the gender discrimination in Palestine and obstacles imposed by Israel’s military occupation, among other barriers, Palestinian women persist in their struggle for equality, dignity, and social justice.’

Both parties discussed the role of women in the ‘peace process,’ the importance of the women’s movement in Palestine, the ongoing negotiations, and Israel’s facts on the ground.

Ashrawi stressed, ‘For decades, we have been subjected to a system of direct control and captivity; Israel is violating our human rights and freedoms and annexing Palestinian land and resources, while completing the siege and ethnic cleansing of Jerusalem.’

Hanan Ashrawi is a Palestinian legislator, activist, and scholar. She is the first woman ever elected to the Palestinian National Council.