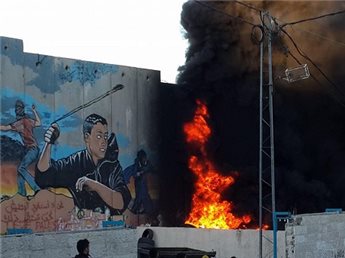 A number of youth from Bethlehem’s Aida refugee camp set fire to an Israeli watchtower, yesterday [Wednesday, March 26, 2014], according to the Facebook page of a local group.The move came a day after Israeli forces entered the camp to replace a destroyed section of the separation wall, which activists in the area have repeatedly targeted, according to Ma’an News Agency.

An Israeli army spokesman said that there were ’20 Palestinians hurling rocks and they also rolled a burning tire,’ but he was not familiar with a watchtower being ignited.

Aida camp is located besides Rachel’s Tomb, a local holy site that is surrounded on three sides by the Israeli separation wall despite being in the middle of the Palestinian city of Bethlehem.

The separation wall runs directly along the camp’s borders, with multiple Israeli watchtowers overlooking the area.

Additional photos at Ma’an, via link below.