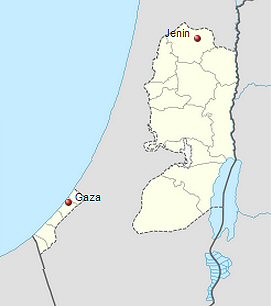 To mark the occasion of Land Day, one thousand olive saplings were planted on Palestinian land threatened with seizure by Israel in ‘Arraba, near Jenin, on Monday.
The saplings were jointly planted by the Palestinian Agricultural relief Committees (PARC) and ‘Arraba Municipality, in lands adjacent to Mabo Dothan settlement, WAFA reports.

Mayor ‘Arraba Rula al-Shaʻer underscored the importance of drawing up a national program for the purpose of reinforcing the Palestinians’ steadfastness, particularly in areas threatened with settlement expansion.

Coordinator of PARC Mohammad Jaradat stated that his association recruited two lawyers who would provide Palestinian farmers with the legal assistance required to protect their lands against being seized by Israeli settlers.

In Gaza, Israeli Forces, stationed at the borders of the Strip, Monday, opened fire on a group of Palestinian youngsters as they raised the Palestinian flag on the borders to the east of Khan Yunes, marking Land Day, according to WAFA correspondent.

He said that a number of youth climbed the separation wall and raised the Palestinian flag, marking the day. Dozens of Palestinians also organized an activity to mark the day by planting olive trees near the borders.

Meanwhile, Israeli soldiers stationed at military towers along the borders opened live fire on the youth and launched tear gas canisters towards them, resulting in several suffocation cases.

An Israeli military spokeswoman told Ma’an that the Palestinians in the area were ‘tampering with the security fence.’

‘Soldiers opened fire into the air’ and the Palestinians dispersed, she said.

Land Day marks the death of six Palestinian citizens of Israel, who took part in a general strike in protest of an Israeli decision to confiscate privately owned Palestinian lands on March 30, 1976.

Israeli forces frequently shoot at farmers and other civilians inside the Gaza Strip if they approach large swathes of land near the border that the military has deemed off-limits to Palestinians.

According to OCHA, 17 percent of Gaza’s total land area and 35 percent of its agricultural land were within the buffer zone as of 2010, directly affecting the lives and livelihoods of more than 100,000 Gazans.