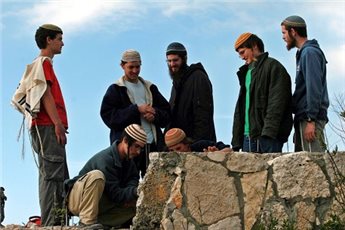 While throwing the rocks, the settlers chanted ‘Death to Arabs,’ witnesses said.

The stones smashed through the windshields of several Palestinian vehicles as soldiers stood by, locals told Ma’an.

Settler violence against Palestinians and their property in the occupied West Bank is largely ignored by Israeli authorities, who rarely intervene in the violent attacks or prosecute the perpetrators.

WAFA reports that Israeli settlers, on Monday assaulted, beat up and sprayed pepper gas at Tareq Idrees, 24, in the old city of Jerusalem, causing him multiple injuries throughout his body, according to witnesses.

Idrees’ in-law said that settlers first attempted to harass Idrees and another youth before they proceeded to beat him up severely in the chest, the hands and the feet. They also sprayed pepper gas at him, causing him to suffocate.

He was transferred to hospital for medical treatment, where his condition was described as moderate.

In 2013, there were 399 incidents of settler violence against Palestinians in the West Bank, according to the UN Office for the Coordination of Humanitarian Affairs.