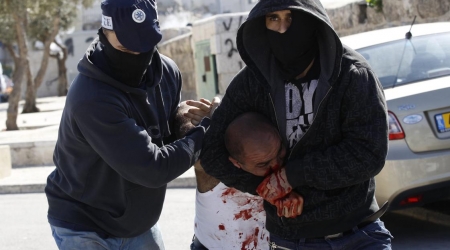 Occupation forces abducted on Monday, at dawn, three Palestinians after raiding several areas across the West Bank, according to reports by security and media sources.Security forces said that Israeli forces took Ahmed Abu Romeila, 16, from al-Salayma district in Hebron and led him to an unknown destination, according to Al Ray. The other two were not identifed.

They stopped Palestinian citizens at the checkpoint, erected at Dotan settlement’s entrance, and questioned them on Monday morning.

Israeli occupation forces routinely carry out arrest raids in the West Bank. Around 40 percent of Palestinian men living in the occupied territories have been detained by Israel at some point in their lives.

On Sunday morning, four citizens were taken during raids in Beit Ummar village, to the North of Hebron. A Jerusalemite citizen was injured and three others kidnapped in Israeli raids on Issawiya town, northeast of Jerusalem.

That evening, a young Palestinian from Aida refugee camp, to the north of Bethlehem, and an injured child from Beit Ummar town, to the north of Hebron were abducted during a string of violent clashes which erupted between occupation forces and Palestinians in the cities, villages of the West Bank and Jerusalem, during the revival of Land Day.