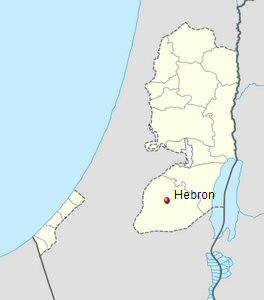 On Sunday, April 27, 2014, four Palestinian boys were detained in al-Khalil (Hebron), at checkpoint 55.Three Youth Against Settlements (YAS) volunteers tried to document the incident after arriving on the scene.

During the filming, they were harassed by several settlers from nearby illegal settlements. This led to the YAS members being detained by Israeli forces for over one hour, according to a report by the International Solidarity Movement (ISM).

Three of the boys were allowed to leave, while one was held back. One of the soldiers loaded his weapon with live ammo, threatening to shoot the 15-year old Palestinian, who still had no idea why he was being held.

The arrest was very violent, ISM reports, as the Palestinian boy was pushed and kicked several times.

Israeli police denied that the arrest was happening, after YAS activists called the District Coordination Officer (DCO) to inform them of the incident.

The boy was taken to a nearby police station, still unaware of the reasons for his ‘arrest’; his current situation is, at the time of this report, unknown.

The Alternative Information Center reports that thousands of photos supporting the Israeli soldier, who is now currently being tried for aiming his weapon at the youth, were sent on Tuesday to the Israeli online media site 0404.

Many of the photos show Israeli soldiers holding signs stating ‘I also support the soldier’. A dedicated Facebook page in support of the offending soldier was also established, and it enjoys over 39,000 likes within two days.

It is reported that over 3,000 such photos were received on Tuesday alone.

The harassment and detention of Palestinian children is common in Hebron. On Wednesday 23rd of April, Israeli Border Police detained a 6-year-old boy.

Two days later, on April 25, the Hebron Christian Peacemakers Team documented Israeli soldiers detaining another boy, 8 years of age. In both cases, the children were held for approximately 20 minutes without their parents present.

Such confinement, especially with children, is often used by the army as a method of information extraction and blackmail against family members and other relations.

More than 800,000 Palestinians, including children, have been kidnapped and imprisoned by Israel since the 1967 occupation of Gaza and the West Bank — illegal under international law — while at least 5,000 Palestinians are currently held by Israel.