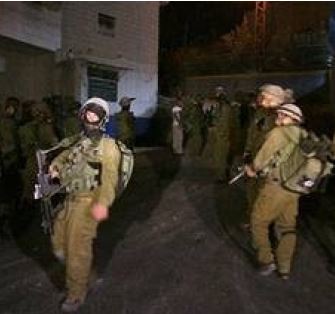 [Wednesday Evening, April 30, 2014] Several Israeli military jeeps invaded Doura town, south of the southern West Bank city of Hebron, and detonated some walls near a home after surrounding it.The Radio Bethlehem 2000 quoted eyewitnesses, stating that the soldiers surrounded the home of resident Mahmoud an-Nammoura, a local calligrapher in the al-Maqfa area, between At-Tabaqa and Khasra villages, south of Doura.

The soldiers then detonated some unknown objects, before other vehicles and a military bulldozer invaded the area. The home in question is vacant.

An-Nammoura stated that he approached the soldiers after noticing them around his place; they asked him to leave before informing him they were just “patrolling the area”, and did not provide any further information.

He said that dozens of soldiers were deployed in the area, where they installed roadblocks near at-Tabaqa and Kharsa villages, before invading the at-Tabaqa village; no arrests were reported.