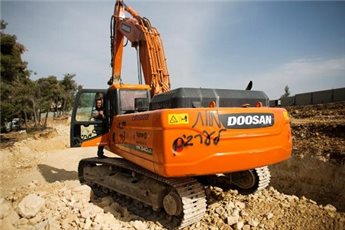 Seven Jewish Israeli minors have been arrested on suspicion of involvement in racist acts and vandalism.Four of the suspects, between the ages of 13 and 15, are accused of spraying racist graffiti at a building site near a Palestinian village west of Jerusalem, on Sunday, according to statements by Israeli police spokeswoman Luba Samri.

Another three were arrested near Jerusalem’s Old City on Sunday for spitting at a priest, reports Ma’an News Agency via AFP. In their bags, police found Israeli flags with Hebrew slogans on them, including the words ‘revenge’ and ‘price tag,’ said Samri, without giving their ages.

All seven are to appear before a judge, Monday, to extend their remand in custody, according to Samri.

Yesterday, a Jerusalem court extended the detention of a man from the settlement of Yitzhar by three days. He was arrested last week with his wife, in concern over an arson attack on a mosque in Israel last month, public radio said.

‘Burning mosques and churches, desecrating holy books and cemeteries and damaging Arabs’ cars have become common phenomena on both sides of the Green Line,’ said an editorial in Haaretz newspaper by Hussein Abu Hussein.

Hussein is a lawyer and is responisible for founding the rights group Adalah.

During the first and second Palestinian uprisings (1987-1993, 2000-2005), a single stone thrown at an Israeli bus would see Israel’s Shin Bet security services and police investigators acting rapidly to round up, arrest and prosecute those involved, often within hours, Abu Hussein wrote:

‘The Arab public — particularly the youth — suspiciously wonders on social media why law enforcement’s resourcefulness and speed disappear when it comes to Jewish terror. Why doesn’t the Shin Bet get involved? Is it because the victims are Arab?’

He warned that ongoing indifference by the Israel authorities could spark ‘a religious war’ with people taking the law into their own hands to protect their holy places, and could easily end in violence if one of the perpetrators were to be caught in the act of desecrating a mosque, Ma’an went on to say.

The US State Department, last week and for the first time, included mention of ‘price tag’ attacks in its global report on terror, pointing to the fact that such incidents go ‘largely unprosecuted’.

Israeli Justice Minister Tzipi Livni said, Sunday, that she would back the idea of defining such acts as ‘terrorism.’

Hundreds of racist attacks against Palestinians and their property are reported every year, but the perpetrators are rarely held accountable by Israeli authorities.

Two ‘price tag’ attacks occurred this past Saturday, one in the West Bank and one in northern Israel, where a car in the of Akka was found with its tires slashed and vandalized with graffiti, including the words ‘price tag’ along with a star of David, according to Ynet.

Police are said to have opened an investigation into the incident.

In related news, arrangements are being made for some 3,000 Palestinian Authority policemen to join security forces in Gaza, according to a statement cited Sunday by Ma’an.

Secretary-general of the Gaza government’s cabinet, Abd al-Salam Siyam, said that the officers would be sent to Gaza in a unity step intended to begin implementation of the Hamas-PLO unity deal reached on April 23.

The division between Fatah and Hamas began in 2006, when Hamas won Palestinian legislative elections.