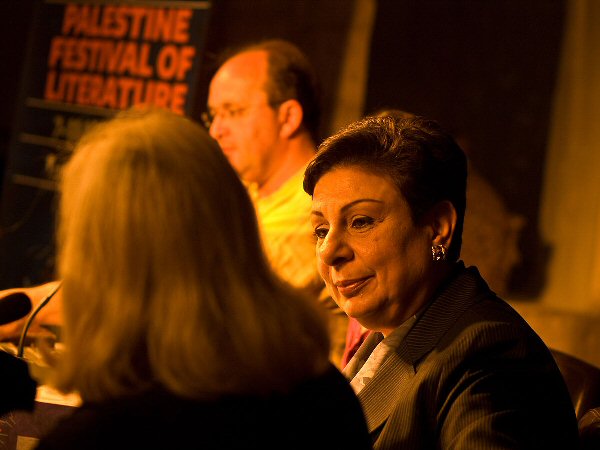 Member of PLO Executive Committee Dr. Hanan ‘Ashrawi expressed, Monday, that the Israeli government and its extreme right-wing coalition reveal the true face of an Israeli apartheid regime based on discrimination, exclusion and rejection of the other, in gross violation of humanitarian and international law.‘Ashrawi’s statement comes in reaction to Israeli Prime Minister’s Benjamin Netanyahu’s plans to enshrine Israel’s status as the ‘national homeland for the Jewish people’ in law, adding that Netanyahu is thereby turning Israel in to a state based on racism by law, and that such plans are part of Israel’s political decision and on-going escalation on all levels, Palestinian news & info agency WAFA has reported.

‘Ashrawi: “This proposal in itself reflects Israel’s racist behavior and discrimination against the Palestinian people enshrined by a set of racist laws enacted by the Israeli Knesset, the only legislative body enacting laws and regulations that violate humanitarian laws and international principles outlawing racism.”

She concluded: “The attempts to institutionalize the concepts of occupation, settlement and apartheid, obliterate the Palestinian people’s presence and abrogate its right to return to its homeland are nothing but futile and helpless attempts that are doomed to fail on local and international levels.”

Just yesterday, Israeli Prime Minister Benjamin Netanyahu moved in defense of his plans to secure Israel’s status as the national homeland for the Jewish people by state law.

At the weekly cabinet meeting, Netanyahu said his aim was to ‘anchor’ Israel’s status in law, ensuring that it would remain a Jewish state, following any peace deal with the Palestinians.

‘There are those who do not want Israel to be defined as the national homeland for the Jewish people,’ he said in remarks broadcast on public radio.

‘They want a Palestinian national homeland to be established here next to us, and that Israel be gradually turned into a bi-national Jewish-Arab state within our reduced borders,’ he told ministers in a reference to Israel’s Arab minority who number just over 20 percent of the population.

Israel’s Arab minority are the descendants of the 160,000 Palestinians who remained on their land after 1948, Ma’an reports:

According to figures published ahead of independence day, which is marked from sundown Monday, Israel’s population stands at 8.2 million, the Central Bureau of Statistics said.

In related political divergence, leader of the Israeli Meretz Party, Zahava Gal-on, said last week that the current Israeli government of Prime Minister Benjamin Netanyahu is not interested in peace.

Gal-on stated, in an interview with Radio Israel, that the Netanyahu government must regain its senses and put the new Palestinian government to the test, to make sure that it is committed to conditions submitted by the Middle East Quartet.