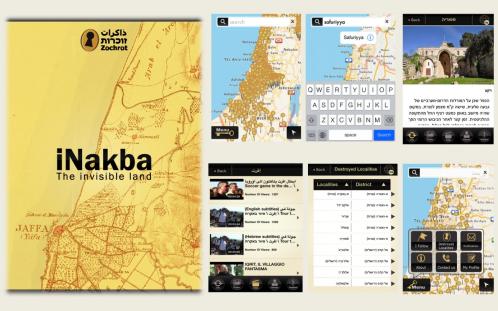 As Israelis commemorated ‘Memorial Day’ on Monday, and began a series of events to lead up to ‘Independence Day’ on May 15th, one Israeli group launched a smartphone app called ‘iNakba’ to allow users to find the locations of Palestinian villages that were destroyed or expropriated during the creation of the state of Israel in 1948.Palestinians mark the day of Israel’s independence as the Nakba (Catastrophe), the day they were stripped of their land and rights, and became the world’s largest refugee population.

In the new app, the Israeli group Zochrot includes an interactive map and photos of the towns and villages that were destroyed by the newly-formed Israeli forces and militia groups in 1948.

According to Zochrot, “Nakba is an Arabic word that means “catastrophe.” The Nakba was the destruction, expulsion, looting, massacres and incidents of rape of the Palestinian inhabitants of this country. It was keeping refugees out by force at the end of the war, in order to establish the Jewish state. And it is the ongoing destruction of Palestinian localities, the disregard for the rights of refugees and displaced people, and the prohibition against teaching and commemorating the Nakba in schools and civic groups.”

Raneen Jeries, who works with Zochrot, said to AFP reporters, “Many Palestinians have difficulty locating their home towns and villages [inside what is now Israel], because cities or Jewish settlements have been built on top of them. There’s a file on each of hundreds of Palestinian villages or cities, and you can find information and see old and new user-uploaded photos about the locality.”

Jeries added that people who live near the ruins of the villages inside what is now Israel can add their own photos and updates, so “Refugees living in Lebanon, for example, can follow their village and each time someone uploads a photo of it or writes a comment, they’ll see an update.”

Zochrot works to “challenge the Israeli Jewish public’s preconceptions and promote awareness, political and cultural change within it to create the conditions for the Return of Palestinian Refugees and a shared life in this country.”

With the iNakba app, the group hopes to increase awareness of the villages and towns that were depopulated for the creation of the state of Israel on Palestinian land seized by force in 1948. The app is available in Arabic, English and Hebrew.