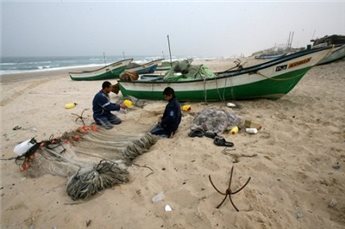 The Egyptian navy detained three Palestinian fishermen off the coast of the southern Gaza Strip, early Tuesday, according to a union official.
Spokesperson for the Gaza fishermen’s union, Nizar Ayyash, told Ma’an News Agency that Egyptian naval squadrons obstructed a fishing boat off the coast of Rafah, upon which they took Amir Jamal al-Aqraa, along with his two brothers Muhammad and Fahd, into custody without providing further details, Ayyash said.

Egypt-Gaza relations have met a slow demise following the ouster of former Egyptian president Mohamed Morsi, in July. In August, Egyptian forces fired on Gaza fishermen, injuring two men and arresting six others, according to Ma’an.

Gaza fishermen face severe restrictions imposed by both Israel and Egypt, whose navies often fire on boats which stray outside the ‘designated’ fishing zones.

Just this morning, Israeli navy patrol boats were reported to have fired at Palestinian fishing boats off the Sudaniya coast, in the northern Gaza Strip, though no injuries were reported.

There are some 4,000 fishermen in Gaza and, according to a 2011 report by the International Committee of the Red Cross, 90 percent of them are impoverished — a 40 percent increase from 2008, due to Israeli-imposed limits on the industry.