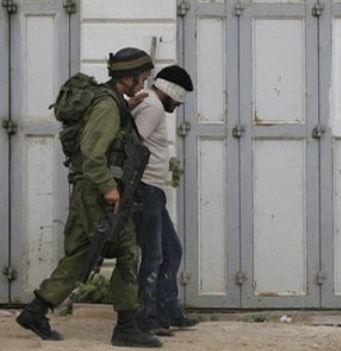 [Wednesday, at Dawn, May 7, 2014] Local sources in the West Bank city of Bethlehem have reported that several Israeli military vehicles invaded various towns in the district, including Methaloon town, near the northern West Bank city of Jenin, where six Palestinians were kidnapped.Sources said that soldiers invaded the homes of Mohammad Bassam ash-Sheikh, 21, and Khader Walid al-Hreimy, 26, and kidnapped them after violently searching their property.

In addition, soldiers invaded Nahhalin town, west of Bethlehem, where they kidnapped Abdul-Karim Mohammad Shakarna, 19, after breaking into his parent’s home and searching it.

Local sources said that the soldiers kidnapped Bashar Fawwaz N’eirat, 34, and his brother Yousef, 30, after invading their property and violently searching it.

On Tuesday evening, soldiers kidnapped four Palestinians, including a child, in the Jenin district, and took them to an unknown destination.

The Israeli army conducts daily invasions, arrests and assaults against the Palestinians, their homes and lands, in different part of the occupied West Bank.