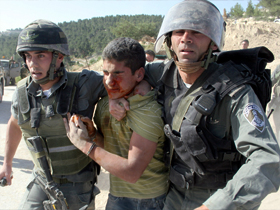 [Sunday, May 11, 2014] Israeli soldiers kidnapped three Palestinian children from different neighborhoods, in occupied East Jerusalem, and took them to an interrogation facility.Local sources have reported that several soldiers invaded the Bab as-Silsila (Chain Gate), in the Old City, kidnapping one child.

The sources said the soldiers invaded a home belonging to Kayed Asaliyya, and violently searched it before kidnaping his son Eyad, 14 years of age.

This the fourth time the army kidnaps Eyad for alleged involvement in throwing stones at Israeli soldiers invading the yards of the al-Aqsa Mosque, in occupied Jerusalem.

In addition, several Israeli military jeeps invaded Wadi al-Joz neighborhood, in the Old City, and violently searched several homes before kidnapping a child identified as Laith Shalaby, 13, and took him to an interrogation facility in the city.

The army confiscated property, and personal items belonging to the kidnapped children, and interrogated the families in their homes.

Furthermore, soldiers abducted a Palestinian laborer from a construction site in occupied Jerusalem.