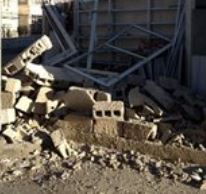 [Wednesday, May 14, 2014] Israeli soldiers invaded the neighborhoods of Beit Hanina, Shu’fat and Ras al-‘Amoud, in occupied East Jerusalem, and demolished three Palestinian structures, allegedly for being constructed without permits.The Ma’an News Agency has reported that Israeli bulldozers, accompanied by military jeeps and police vehicles, invaded the three Palestinian neighborhoods, and demolished two shops and a workshop.

It said the army demolished a store, owned by resident Mousa al-Natsha, in the al-Ashqariyya neighborhood, in Beit Hanina. The 55 square/meter store was constructed in 2011.

Soldiers also invaded the Shu’fat neighborhood in Jerusalem, and demolished a store in the al-Khansa Street.

The owner, Mohammad Awadallah, told Ma’an that the walls of his 18 square/meter store were built some 80 years ago, before Israel was established in the historic land of Palestine in 1948, and before it occupied the rest of Palestine in 1967, and that the family added a tin roof to the structure in 2011.

Awadallah added that he received various demolition orders against his structure, and that he paid more than 20.000 NIS in fines.

In addition, the army invaded Ras al-Amoud and demolished a structure that was built 14 years ago. A Palestinian, identified as Sufian Jaber, owns the 100 square/meter structure and used it as a metal workshop.

The United Nations said that the Israeli authorities have demolished and destroyed more than 500 Palestinian homes and structures in 2013, resulting in the displacement of more than 850 Palestinians.

Statistics of the Israeli Committee Against House Demolitions, state that at least 27.000 homes and structures have been demolished by Israel since it occupied the West Bank, and East Jerusalem, since 1967.

While Tel Aviv continues to approve thousands of units for Jewish settlers in occupied Jerusalem, and the occupied West Bank, it rarely grants the Palestinians in and around Jerusalem permits to construct homes, or even to fix, modify and expand existing homes and property.