New Unity Government To Be Unveiled in Days 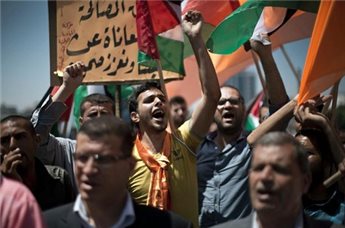 A new Palestinian ‘consensus government’, to be named by the PLO and Hamas, is to be finalized within days, according to a senior Hamas official.Senior member of President Mahmoud Abbas’ Fatah movement, Azzam al-Ahmad is ‘arriving in Gaza on Wednesday and Thursday to meet with the Hamas reconciliation delegation to hold consultations,’ Bassem Naim, an adviser to Hamas’ premier, Ismail Haniyeh, told AFP.

‘We expect the government to be announced by (Abbas) early the following week,’ he said, and will then be presented to the Palestinian parliament for a vote of confidence.

Hamas signed a reconciliation deal with the PLO, last month, following an internal split between factions which lasted for years.

Under the deal, the groups now prepare to form an ‘independent government’ headed by Abbas, paving the way for long-delayed elections, AFP reports.

Various Israeli political sources have informed that the Middle East Quartet will most probably recognize the future unity government, according to Al Ray, who reports that the same sources have also declared it likely for the Quartet to require that the new government recognizes Israel and previous signed agreements.

Israel pulled out of US-brokered peace talks in mid-April, saying that it would not negotiate with any Palestinian government supported by Hamas.

Chief negotiator Tzipi Livni came under attack, on Sunday, for meeting with President Abbas, as senior officials insist there was no intention of resuming negotiations.

Thursday’s meeting in London was the first between the two sides since the collapse, last month, Ma’an reports, and came after both held separate talks with US Secretary of State John Kerry.