Some Hunger Strikers Close to Death 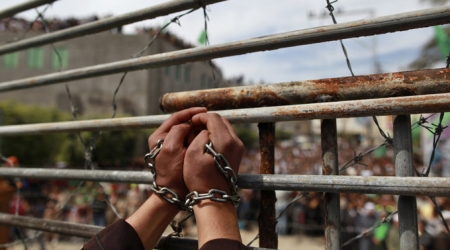 The High Leadership Committee for Palestinian Prisoners has announced that health conditions of some of the prisoners are deteriorating.
The committee points out that three prisoners, Nael Khalaf, Yasser Badrassawi and Maher Barqan, who have been on strike for 25 days in a row, vomited blood two days ago, and that Ayman Tbeish’s health is also subject to danger, after 80 days of an open-ended hunger strike.

According to Al Ray, the committee has confirmed that senior prisoner leaders, including Abbas al-Sayed, Hamas senior leader, and Hasan Salama, a commander of the Palestinian Holy War Army, joined the ongoing strike on Sunday.

It was added that some of the Palestinian administrative detainees are in serious danger and close to death.