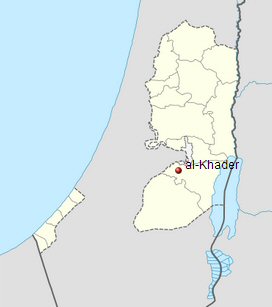 Israeli forces, on Sunday, stormed a school in the village of al-Khader, to the south of Bethlehem, while settlers took over an agricultural property in the village, according to Ahmad Salah, coordinator of the anti-settlement committee in the village.Salah said that the soldiers stormed the school in the morning hours, causing a state of panic and horror among the students, most in their first, second and third grade of school, WAFA reports.

Meanwhile, Israeli settlers from the illegal settlement outpost of Sidi Boaz took over an agricultural pond, to the west of the village, where they conducted religious rituals. The pond was used by residents use to irrigate their crops.

Salah said the incident comes as a prelude to expand the outpost, according to WAFA, noting the escalated assaults by settlers in the area, including the closing of agricultural roads and the act of unleashing dogs at residents.