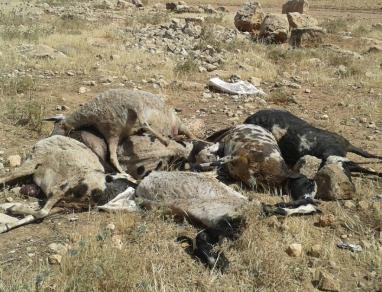 [Sunday, May 18, 2014] Aref Daraghma, head of the Al-Maleh Village Council, in the Northern Plains of the occupied West Bank, stated that at least 14 sheep died due to toxins left by Israeli settlers in a Palestinian grazing land, close to an illegitimate Israeli settlement.Daraghma said that 14 sheep, belonging a local shepherd, identified as Abdul-Rahim Bsharaat, from the al-Hadeediyya village, died after eating grass mixed with toxins, the Wattan News Agency has reported.

He added that the settlers frequently dispose toxins, trash and other materials into Palestinian grazing lands in the area, especially near the Roeh illegal settlement, completely built on private Palestinian lands.

He added that resident Bsharaat losses are estimated by 1,000 Jordanian Dinars (Approximately $1,413).

Palestinian villagers and shepherds in the area are subject to frequent attacks by fanatic Israeli settlers, and are subject to ongoing violations and displacement by Israeli soldiers.

Many villages and Bedouin communities in the area have been repeatedly demolished and removed for the benefit of Israel’s illegitimate settlement activities, and due to frequent military drills carried out by the army there.