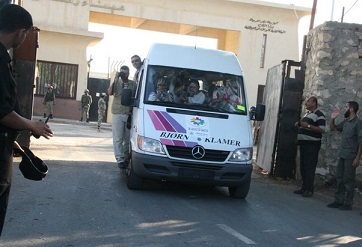 [Sunday, May 18, 2014] Around 30 international peace activists, in two humanitarian convoys, made it into the Gaza Strip through the Rafah Border Terminal, between Gaza and Egypt.The convoys, Miles of Smiles 27 and Algeria Convoy, carried various medical and humanitarian supplies to deliver to various medical centers and instructions in the besieged Gaza Strip.

The Ma’an News Agency has reported that members of the dissolved government in Gaza, various legislators, and Hamas political leaders welcomed the humanitarian activists who will later be holding a meeting with Ismael Haniyya of Hamas.

The two convoys intend to stay in Gaza for a few days to visit various governmental and civil instructions, and will be participating in an official ceremony, announcing the opening of the Algerian Specialized Hospital in Gaza.

Last month, Miles of Smiles 26, carrying humanitarian and medical supplies and various Arab and international Activists, made it into the Gaza Strip.

More than 400 patients, including infants and children, died due to Israeli neglect, many of them while awaiting Israeli permits to cross the border for medical treatment.

At least 324 Palestinians have also been killed in tunnel collapse incidents across the border with Egypt since Israel imposed the deadly siege on Gaza in 2006.

At least 20 Palestinians were killed when the Israeli military bombarded tunnels while they were in them.