Palestinian Injured After Settlers Hurl Stones At His Car 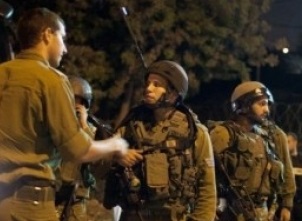 A number of militant Israeli settlers hurled stones, on Monday, May 19, 2014, at a Palestinian car driving on the main road near Beitello village, near the central West Bank city of Ramallah, causing injuries to the driver and smashing the windshield of his car.Local sources said that a number of settlers from a nearby illegal Israeli settlement threw rocks at the car of Mohammad Abdul-Aziz , fracturing his nose after smashing his windshield. The wounded Palestinian was moved to a local hospital.

The settlers fled the scene following the attack; Israeli soldiers did not attempt to locate the assailing settlers, the sources added.

Israeli settlers frequently attack the Palestinians, their homes, lands, property and even holy sites and graveyards in occupied Palestine.

The assaults are part of “Price Tag” attacks against the Palestinians, in which they are blamed for the rare Israeli removal of illegitimate settlement outposts.

Such attacks include burning, and attempting to burn, several mosques and churches, desecrating Islamic and Christian graveyards, and writing racist graffiti insulting the Palestinians, and even insulting Prophet Mohammad and Jesus Christ.

More than 500,000 Israeli settlers live in settlements across the West Bank and East Jerusalem, in direct defiance of international law.