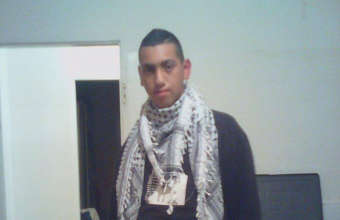 Israeli forces have taken Ahmad Qasim al-Azraq to Ofer prison, following his interrogation in Etzion.Ahmad is a resident of Aida refugee camp, the PNN reports.

Sunday evening, the Israeli army broke into his home, where he was given a notice to report to interrogation the following morning.

Family sources inform that Ahmad went to the Etzion center, south of Bethlehem, with his father, for interrogation.

After a few hours, he was called in for questioning. His father asked to wait outside and, later, told to go back home, as his son would be going to Ofer prison, where he would be taken to court the following day.

Ahmad is the brother of Mohammad Al-Azraq, Fatah leader in Aida refugee camp, who was also taken from his home, this past March, and is currently awaiting court in Ofer.