Imprisoned Palestinian leaders Marwan Barghouthi and Ahmad Saadat have announced that they will go on hunger strike tomorrow, according to a senior official. 40 prisoners in Al-Naqab Prison will also join in the strike, on Wednesday. An Israeli court has recognized an emergency appeal by the Ministry of Prisoners’ Affairs to cancel sanctions imposed on hunger-striking prisoners.Issa Qaraqe of the Minister of Prisoners’ Affairs said, Tuesday, that over 120 Palestinian prisoners, including the two jailed leaders, will go on a one day hunger strike, in solidarity with administrative detainees who have been refusing meals for nearly four weeks.

The day-long strike is to serve as a warning to IPS, Ma’an reports, urging it to comply with the demands of hunger striking prisoners held without trial, according to Qaraqe.

According to Ahrar Prisoners Studies Center, 40 prisoners in Al-Naqab Prison will also take part in the recently staged open-ended hunger strike, on Wednesday.

A spokesman for the center told Al Ray, on Tuesday, that the move by 40 prisoners in joining the strike comes as a solidarity move with 140 administrative detainees who have beem on hunger strike for over three weeks.

The number of hunger strikers has reached 225, Al Ray reports, including administrative detainees and other prisoners who joined the strike by their own will. The center added that additional groups of prisoners will step in soon.

In related news, an Israeli court has accepted an emergency appeal by the PA’s Ministry of Prisoners’ Affairs to cancel sanctions imposed on hunger-striking Palestinian prisoners.

According to Ma’an, lawyer Husam Younis explained that the court decided to allow hunger strikers to take their normal daily break at prison courtyards, a privilege which had previously been banned. In addition, lawyer visits are to be made easier for prisoners. Furthermore, the court has decided to allow entry of new clothes to hunger strikers, as their clothes were taken from them on the first day of the strike, and they have been left with only with those they were originally wearing.

Ministry of Prisoners’ Affairs also filed an appeal against a draft law which will enable prison wardens to force prisoners to eat and drink.

Well over 100 Palestinian prisoners are currently on hunger strike in protest of Israel’s policy of Administrative Detention, in which prisoners are held without charge or trial. Most began their strike 26 days ago.

In 2012, Israel made a promise to put limits on the policy, in an agreement which ended the strike of 2,000 Palestinian prisoners, but as of March 1, 183 Palestinians were still being held under administrative detention.

At the beginning of May, the vast majority of more than 5,000 Palestinian prisoners being held in Israeli prisons began taking part in a solidarity strike with the prisoners who have been refusing food since April 24.

Health conditions of the hunger strikers are deteriorating, with some close to death. 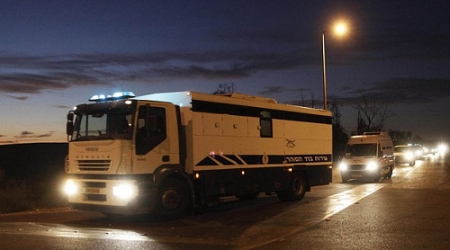