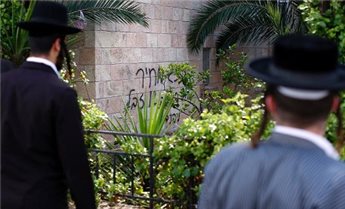 In what appears to be a token move by the state of Israel, three young Jewish militants have been placed under house arrest for suspicion of possible plans to disrupt Pope Francis’ visit to Israel this weekend.’The police and Shin Bet (security service) have taken out restraining orders against several right-wing activists who, according to information from Shin Bet, are planning to commit provocative acts during the pope’s visit,’ police spokeswoman Luba Samri told AFP.

The restraining order is to apply for four days.

According to Ma’an, the Pope will visit the Holy Land from May 24-26th and is set to hold a mass in the site known as the Upper Room or Cenacle, on Mount Zion near the walls of the Old City.

Israeli security is to deploy an extra 8,000 police throughout Jerusalem for the visit, and is also reported to have strengthened security around Christian sites targeted in a massive and continuous wave of vandalism attributed to Jewish extremists.

According to the site I Acknowledge, groups of Israeli orthodox Jews, this week, have been wandering the Christian quarter of Jerusalem, calling on them to leave Israel under threat of having their places of worship burned to the ground.

A resident of Jerusalem’s Christian Quarter, George Makhlouf, was surprised and saddened to see Orthodox Jewish citizens walking the streets, handing out the flyer below.

Furthermore, US officials have said that they support Francis’ visit to the Middle East, with State Department spokeswoman Jen Psaki saying that Washington ‘would certainly be concerned about any rise of anti-Christian or anti-religious sentiment that’s growing there.’

‘Obviously we condemn that type of rhetoric and behavior,’ she told reporters.

(See link below for related info.)