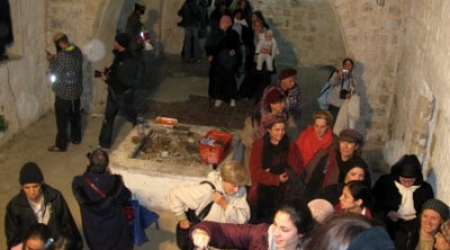 Violent clashes erupted between Palestinians and Israeli settlers at Joseph’s Tomb, after it was stormed by dozens of Jewish Israelis who performed religious rituals there.
According to witnesses, a large bus full of settlers, escorted by a number of Israeli military jeeps, stormed the holy site on Thursday, at dawn, Al Ray reports.

Several injuries and suffocation cases were reported, as a state of panic ensued in the area.

The clashes lasted for hours before the patrols withdrew, going towards Hawara refugee camp, in the south of the city.

According to Al Ray, Israeli settlers break into the tomb under the claim that it belongs to the biblical Joseph, while historical novels stress that the funerary is designated to one Sheikh Yusef Dweikat, a local religious figure.

Also in the Nablus region, forces invaded the village of Burqa, to the northwest, serving one Maan Haji, age 15, with a summons to appear before Israeli intelligence.