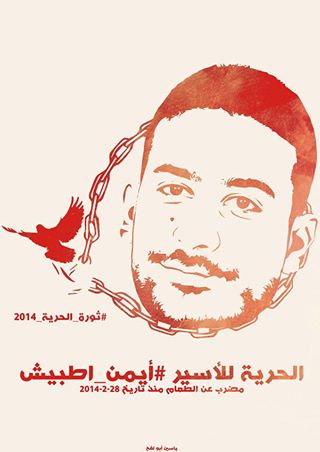 [Thursday, May 22, 2014] The International Red Cross – Palestine Branch has informed the family of detainee Ayman Tbeish, from the southern west Bank city of Hebron, that their hunger-striking son could die at any given moment.His family stated that the Red Cross asked them to come to its main office in Ramallah, instead of their branch in Hebron, and the family met there with Red Cross officials while Minister of Detainees Issa Qaraqe’; and the head of the Palestinian Prisoners Society (PPS), Qaddoura Fares, also attended the meeting.

The Red Cross told the family that Tbeish, who started his hunger strike 83 days ago, is facing serious health conditions, and complications, and could die at any given moment.

He went on strike due to bad living conditions, abuse, and demanding an end to his arbitrary Administrative Detention without charges of trial.